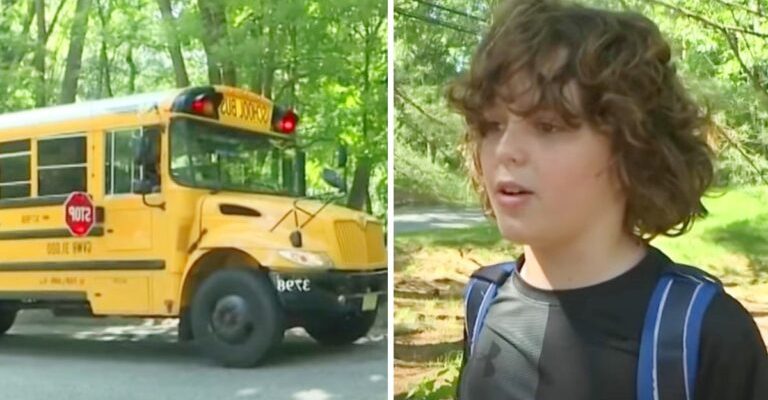 Life happens quickly and sometimes what starts as an ordinary day suddenly turns in an instant into something you never saw coming. This is what happened to a boy named Rocco Arcese, who went from an ordinary kid to a real-life hero while he was headed to Joyce Kilmer Middle School in New Jersey.

An ordinary day
At first, it seemed like a typical day for the fourth-grader. But by 10 AM, he was being praised for his quick actions The 11-year-old had been going about his daily routine: getting ready for school and heading for the bus stop. He was the first stop on the bus’s route, so he usually didn’t have to wait long.

A strange smell
When the school bus arrived, Rocco got on the bus and rode barely 300 yards on Chapel Road before he started smelling something odd. He could smell some type of burning that reminded him of burnt rubber and figured it would be best to alert the driver. In an interview with CBS New York, he explained:

Acting fast
Thanks to Rocco’s quick thinking and keen sense of smell, he and the bus driver managed to get off the bus only moments before it burst into flames. The engine compartment at the front of the vehicle had experienced a mechanical problem, firefighters later elaborated. Within minutes, flames engulfed the school bus, ravaging its front end and destroying the seats.

Help on the way
Police and firefighters immediately responded to the scene, and the bus ultimately had to be towed. A brave boy
While respondents were attending to the fire, Rocco phoned his mom, telling her he needed to be picked up. When she arrived, she was stopped by a police officer.

“The officer told me they talked to Rocco, that he was safe, and that he was very calm, very brave,” she said. “They said he was the calmest kid they’d ever seen in a situation like that.”

“I didn’t freak out. I don’t know why,” Rocco later admitted.

Accustomed to pressure
Stacy wasn’t totally surprised by her son’s reaction. As an award-winning downhill racer, he seems to perform well under pressure. “That’s the kind of kid he is,” she told the Mahwah-Ramsey Daily Voice. “Nothing rattles him.”

“I’m kind of glad there weren’t other kids on that bus,” she continued. “They might’ve been scared. Rocco’s something else: He knew what to do.” According to the fourth-grader, this isn’t the first time he’s smelled smoke on a school bus — but both he and his mother hope it is the last.

Commending the hero
A couple of weeks after the fire, the Mahwah Fire Department posted a photo on Facebook, along with the following message:

“Last Night Rocco Arcese was made an honorary Mahwah Firefighter by Chief Warnet. On June 12th Rocco smelled smoke on his school bus and immediately told the driver. The driver then pulled over and with Rocco exited the bus. Soon after the bus was completely in flames. Thanks to Rocco saying something nobody was hurt. We welcome Rocco into our ranks and look forward to seeing him at drill nights.”
“Rocco also received commendations by our elected officials but we know he probably wants to start driving Engine 425 more than anything.”

It’s truly incredible that Rocco spoke up about the smell. Otherwise, he and the driver’s life would have been in danger. Watch the video below to hear him recount the incident.
VIDEO HERE