Michelle didn’t think she and Barack could be together.

Michelle was “too miffed” when Barack proposed marriage just seconds after having an “insane” argument with her.

Former US president Barack Obama, and his wife, Michelle, are celebrating 30 years of marriage today. The couple began their relationship when they both worked in the same place and built a life together.

The pair are beloved worldwide and have shared posts about one another on many occasions. Last year, on their 29th wedding anniversary, Barack shared an Instagram post while Michelle tweeted two photos.

Michelle’s post showed the couple sitting on a sofa in their younger years and then another of them more recently in a similar pose. Michelle captioned the post, “How it started vs. how it’s going.”

Barack’s post contained the same photo on the sofa that Michelle used as well as one of the pair looking out a window together as Barack placed his hand protectively around Michelle’s waist. Barack confessed he couldn’t imagine life without his wife.

The couple has a beautiful love story spanning decades, but their union might never have happened. Michelle initially didn’t want to be with Barack, and she clarified that to him.

Michelle Didn’t Think She and Barack Could Be Together
Michelle and Barack met in 1989 when they both worked at the same law firm. They met because their bosses asked Michelle to show Barack around as she was new to the firm, and they both went to Harvard. 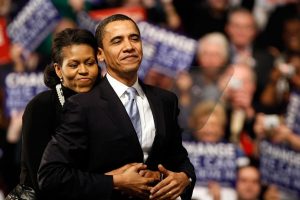 Barack Obama is hugged by Michelle Obama before his speech at a primary night rally in the gymnasium at the Nashua South High School on January 8, 2008 in Nashua, New Hampshire | Source: Getty Images

When the pair met, Michelle had sworn off dating, admitting that her work consumed her and she could not focus on a relationship. Although she said she was intrigued by Barack, she confessed:

“Not once, though, did I think about him as someone I’d want to date.”

Michelle thought of herself as Barack’s mentor at the firm and knew that she wasn’t interested in dating anybody. However, Barack waited only a month before he asked Michelle out on a date. 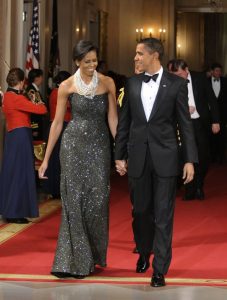 President Barack Obama and first Lady Michelle Obama enter the East Room for entertainment after a black-tie dinner at the White House on February 22, 2009 in Washington, DC | Source: Getty Images

While Barack was hopeful that the pair could start a beautiful romance, Michelle was skeptical and thought: “No way. This is completely tacky.” Yet, sometime later, the pair eventually went on a date.

Michelle was not expecting to be impressed by Barack but was taken aback when she began to develop feelings for him. She confessed:

“We clicked right away…by the end of the date, it was over…I was sold.”

Creative Marriage Proposal
After dating for two years, Barack decided it was time to propose to Michelle. On July 31, 1991, Barack finally popped the question. However, he did not do it in a way that has been used many times.

Michelle wrote about the moment in her book “Becoming,” sharing the unconventional method Barack used to propose. The couple was on a dinner date when Barack began discussing marriage.

He told Michelle that although he loved her very much, he couldn’t see the point of getting married. Michelle revealed that they had an “attorney-like” discussion about the topic.

Michelle revealed that she became angry, and when the waiter brought her dessert plate covered with a silver lid, she was almost too angry to look at it. However, when she eventually looked at her plate, she saw a black velvet ring box instead of a chocolate cake.

Michelle found a diamond ring inside the box that Barack used to propose. She shared:

“Barack looked at me playfully. He’d baited me. It had all been a ruse. It took me a second to dismantle my anger and slide into joyful shock.”

Barack had intentionally started the argument to get a rise out of Michelle before he proposed to her. His plan had worked, and she had become worked up before she finally said yes.

Miraculous Healing Wedding Day and Married Life
In 1992, Michelle and Barack walked down the aisle. However, before they reached that point, they were not both healthy. Michelle shared that on the morning of their wedding, Barack fell ill.

Barack woke up with a head cold on the day of his wedding to Michelle, but she confirmed that by the time she met him at the end of the aisle, he had made a “miraculous recovery.”

Michelle said that after they said “I do,” they danced the night away and said they still have a lot of fun together but also do the hard work it takes to ensure their relationship stays happy.

After getting married, the Obamas started their family. On July 4, 1998, Michelle and Barack welcomed their first daughter, Malia. Their second daughter and final child, Natasha “Sasha,” was born on June 10, 2001.

Before welcoming their daughters, though, the Obamas went through heartbreak as Michelle attempted to fall pregnant. Michelle revealed that she went through miscarriages before falling pregnant.

Although Michelle eventually conceived through IVF, she shared her thoughts on miscarriage not being spoken about often enough, admitting:

“We sit in our own pain, thinking that somehow we’re broken.”

Michelle said she thought she had failed because she did not know how common miscarriages were. Fortunately for the Obamas, IVF helped them to bring two daughters into their family.

Malia and Sasha have brought much joy and light into their parents’ lives, but Michelle has expressed that her daughters are similar in many ways but have their differences like many siblings.

When talking about what makes her daughters unique and their personalities different, she said:

“In some ways, Malia and Sasha couldn’t be more different. One speaks freely and often; one opens up on her own terms. One shares her innermost feelings; the other is content to let you figure it out.”

She then said neither was a better or worse way to approach life and that her daughters have grown into beautiful young women whom she and Barack are incredibly proud of.

are incredibly proud of.

It is beautiful to see that despite a rocky start to their relationship, the couple is still going strong 30 years later. We wish them many more happy and healthy years together.