A young boy was asleep in the room he shared with his little sister when he smelled something. Then, he woke up to find flames and smoke all around. But instead of running away or surrendering to his fear, he quickly sprang into action, saving the day like a true hero.

Heroes come in all shapes and sizes. Sometimes, the supernatural characters from our favorite books and movies can leave a lasting impression on our personalities, helping us realize our full potential and hidden talents.

While we may not have impressive powers like Superman, Spiderman, Batman, and others, we can still make a difference with our kindness, compassion, and loving hearts. Deep down, we’re all superhumans and capable of much more than we give ourselves credit for. Today’s story sheds light on a similar theme.

A Happy Family
Tabitha and Allen Woods lived with their beautiful family in Kingston, Bartow County, Georgia. The couple was parents to three lovely children — Dakota, Noah, and Lily. They loved their kids wholeheartedly and never missed a chance to dote on them.

The young honorary fireman also received a rare lifesavers’ award and sat in the front seat of a firetruck to enjoy a celebratory ride.
The Woodses led a happy, fulfilling life and looked forward to welcoming each day with warm hearts and open arms. Their son, Noah, was a playful and friendly child who loved goofing around and being a protective older brother to his baby sister, Lily.

An Unlikely Incident
According to his family, Noah loved superheroes and aspired to be one; little did he know that fate would soon present him with a chance to display his heroic skills.

On Sunday, February 9, 2020, Noah was asleep in the bedroom he shared with Lily. Everyone in the house was also sleeping since it was early morning. Suddenly, the five-year-old boy woke up to find smoke and flames around him.

It didn’t take Noah long to realize that there was a fire in the house, endangering not only his life but also that of his little sister. Instead of letting shock and fear get the best of him, he jumped into action.

To the Rescue
The only way out of the bedroom was through the window. So, Noah grabbed his sister and carried her out through the window, leading her to safety. He also helped rescue his best buddy, his dog, but his job wasn’t yet done. Noah knew more people needed his help.

After saving his little sister, dog, and himself from the burning building, fire officials said the boy ran next door and woke up his uncle, who alerted the rest of the family. In short, Noah’s exceptional courage, bravery, and quick thinking helped save the life of his loved ones. 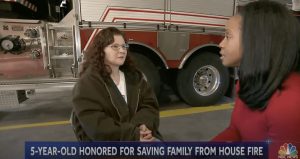 Jumping into Action
Noah’s mother, Tabitha Woods, said she and the whole family were asleep on Sunday when she was awakened by the barking dog. Then, she said she saw smoke coming from her kids’ room. She expressed:

“I was so scared that they were still trapped in there.”

But her sweet boy pushed fear aside and knew exactly what he had to do. Tabitha shared that she had been teaching her son fire safety all along, but even she couldn’t have expected that his learnings would come in handy this way.

Pushing Fear Aside
When a News Correspondent asked Noah if he felt scared of the smoke and flames around him, he shyly replied, “No.”

Shortly afterward, the Bartow County firefighters arrived on the scene, and they were astounded to see that another hero had already helped save the family. Fire Chief Dwayne Jamison stated:

“Because of his quick actions, he alerted the rest of the family members, so a total of eight family members were able to get out of the house with only minor injuries and smoke inhalation.” 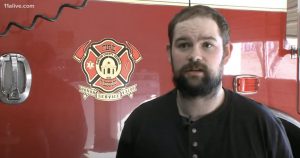 A Proud Father
Noah’s father, Allen Woods, shared that the episode was incredibly harrowing, but he was grateful for his little boy, who bravely jumped in to rescue his loved ones. He said:

“I’m just proud to be able to say that I’m his father.”

Allen said that his son had always been his hero. Meanwhile, the Bartow County Fire Officials believed an overloaded electrical socket caused the fire in the children’s room. With no working smoke detector in the house, only Noah was the first one to wake up.

Recognizing the Boy
According to the Fire Department’s Facebook post, Noah helped rescue seven of his family members.

The officers honored the youngster for his valiant efforts in a special ceremony. Fire Chief Jamison said during the February 14, 2020, event:

“Normally our firefighters are being recognized… but we’re here today to recognize one of our local heroes.”

Not All Heroes Wear Capes
Noah’s father’s cousin, a firefighter at the Bartow County Fire Department, was also present on the special occasion to recognize the young boy. He expressed:

“I’ve heard heroes come in all shapes in sizes. He showed me this week, age is a part of it too. Knowing a 5-year-old can go out and save his whole family is an eye-opener to me.” Noah Woods is pictured enjoying a celebratory ride in a firetruck. | Source: YouTube.com/11Alive

“Noah Woods Day”
Toward the end of the ceremony, officers presented Noah with his very own badge, certificate, helmet, and firefighter pajamas. The young honorary fireman also received a rare lifesavers’ award and sat in the front seat of a firetruck to enjoy a celebratory ride.

Brave & Beautiful
David Woods, Noah’s grandpa, created a GoFundMe to help the family stay in a motel or rent a small home while they rebuilt their house. Over $35,000 were raised on the crowdfunding page. David also hailed his grandkid’s heroic skills in these words:

“We thank God for our Noah and his heroic actions. By the grace of God, all nine of our loved ones were able to get out of our home. If it wasn’t for Noah, we may not be here today.”

According to the Woodses, Noah always wanted to be a superhero, but following the incident, he expressed a desire to be a police officer.

Truly Inspirational
This beautiful story teaches us that we can all make a difference and help others, regardless of age and position. Thanks to this Georgia boy’s act of tremendous bravery, courage, and empathy, all of his dear ones survived a nerve-wracking tragedy.

Noah is an inspiration to people of all ages. Thank you, young man, for showing us that we all have the power to be heroes. Please share this uplifting story with your loved ones and share your comments for the sweet boy in the comments section.