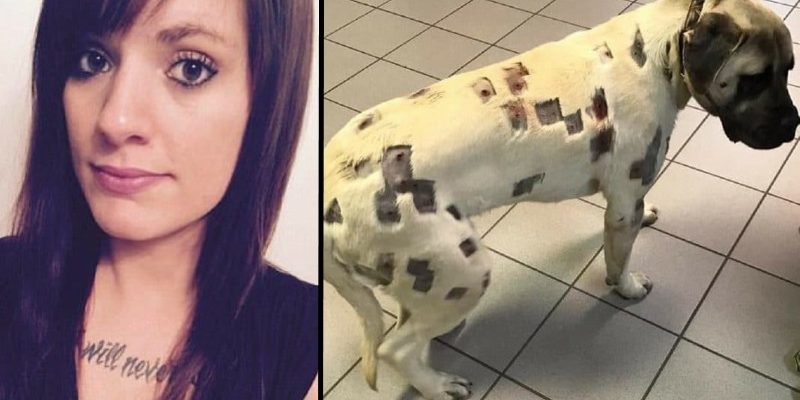 Hayden Howard of Seymour, Indiana, is the proud owner of an adorable, 100-pound English Mastiff puppy named Jackson. She loves her big pup, but one day, she realized something wasn’t quite right with her furry friend. While running her hands through his thick fur, she felt something that just wasn’t right. Under all that hair, she felt odd marks and what she thought were bumps on the animal’s skin.

Initially, Hayden believed the strange marks on Jackson’s body were likely bug bites. When she looked closer, however, she knew it was something much worse. Hayden was horrified to discover that Jackson didn’t have raised bumps, but instead, he had actual holes in his skin — and a lot of them. Perplexed, she took her beloved pet to the veterinarian, but nothing could prepare her for what would be discovered.

Hayden was stunned to find out that it wasn’t bug bites at all, and there was a much bigger problem at hand. There were indeed holes in Jackson’s flesh, and the cause was downright sickening. Jackson had been shot, repeatedly. As the vet got to work, shaving the dog in order to get to the wounds, 20 pellets and 7 BBs were removed from Jackson’s body. In addition, the staff estimated that there were at least another 20 pellets and BBs lodged in his body that they couldn’t remove. But, it gets worse.

The vet also estimated that another 20 projectiles had struck the dog and bounced off. That means Jackson was shot over 60 times. “I was in shock, I didn’t even know what to think,” Hayden recalled, according to Wave 3 News. Hayden wasn’t the only one stunned by the senseless act of violence against the animal. Police were called, and they were shocked to see what had been done to Jackson as well.

This wouldn’t be the only stunning discovery they would make while investigating the case, however. While at Hayden’s house, officers found BBs stuck in a tree and followed the direction of fire. This led them to obtain a search warrant for the house next door belonging to 44-year-old Tim Woodward.