The couple once beat the marriage record for their long-lasting union.

The former President and First Lady of the United States chose an old two-bedroom ranch to retire in even though they could’ve lived in a chic home.

Although they’re still together and very much in love, the pair have experienced hard times that almost led to divorce, but their love was more potent.

In a 2019 People magazine article, Jimmy revealed that during quiet moments, like birthdays, he and his wife preferred to be home. The couple, who have been inseparable since the early 1940s, usually spend the day entirely alone.

The former politician said in the past that they would enjoy a quiet day with visitors not welcome to their home. He revealed they would isolate themselves and not receive emails and minor calls.

Jimmy credited his wife for being the primary source of his life energy. Rosalynn’s husband told the publication that he’d lived so long because he’d married “the best spouse” who took care of him and did things that challenged him. 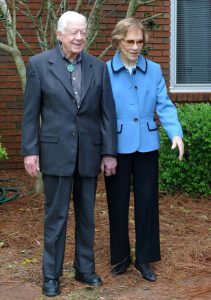 He believed he’d married a woman who kept him alive and invested in life. Although he spent his day relaxing and peaceful, he and his wife usually led busy lives on their small ranch, just like in their youth.

It Was Love at First Sight for Jimmy, but Rosalynn Took Some Time to Warm Up to Him
Before Rosalynn became Mrs. Carter, she was Rosalynn Smith. As a young girl, she’d believed she’d grow up to “be an old maid,” and when boys tried to see her at her Plains, Georgia home, she’d ignore them.

In the book “What Makes a Marriage Last,” Jimmy’s future wife told her mother to say she wasn’t home when she answered the boys’ phone calls. The future First Lady explained that she didn’t know any boy she’d want to spend her life with at the time.

Jimmy recalled how timid Rosalynn was back then, and although she wasn’t interested in other boys, she was keen on him. The book claimed she said she fell in love with his photo, which was on her bedroom wall, however,

“My mother said it must have been his white uniform, but I don’t know.”

Back then, everyone in Plains knew everyone else, but Rosalynn was closer to Jimmy’s family than others. Her best friend happened to be his sister, Ruth Carter, so she spent a lot of time at the Carter home, although Jimmy was never around.

Rosalynn was three years younger than him and first started to notice him at age 13. However, because of their age difference, a relationship was impossible, but when she was 18, Jimmy returned to their hometown from Annapolis, Maryland’s Naval Academy.

During his month-long break, Rosalynn and Ruth planned how they get the former together with Jimmy. Ruth would call her friend when her brother was around, and the future Carter wife would rush over, but by the time she’d arrived, he was gone!

US First Lady Rosalynn Carter and President Jimmy Carter dance together in the Grand foyer of the White House, Washington DC, on January 31, 1979 | Source: Getty Images

The reason was that Jimmy had many girlfriends as a younger man and even dated Miss Georgia Southwestern State while at the academy. However, during the last night of one of his breaks, he was without a date because his girlfriend was at a family reunion.

He drove around with Ruth and her boyfriend looking for a date, picked Rosalynn up from the church, and invited her to the movies. In the book, Jimmy said he felt “compatible” with the future First Lady because she was both innocent and beautiful.

During that first date, the future US President kissed Rosalynn, and the following morning he confessed to his mother, “Rosalynn was the one I wanted to marry.” On President’s Day, Jimmy proposed while Rosalynn joined him and his parents on an Annapolis trip. 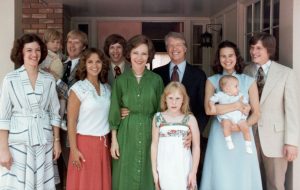 At first, Rosalynn declined as she was focused on her education because she’d promised her father to attend a four-year college. However, about three months later, she agreed, and the couple tied the knot on July 7, 1946.

During their first wedding anniversary, Jimmy’s wife was at a hospital giving birth to their first child, Jack Carter. The couple welcomed three more children, Chip, Jeff, and one daughter, Amy.

The early years of their marriage with only Jack saw them traveling around the nation because of Jimmy’s military postings, and things weren’t always easy. His wife had to take the child with her to get groceries using a bus.

Upon arriving home, she had to leave the groceries on a street corner, rush to take the child home, and then return to get her packages. In the 1970s, Jimmy said, “Rosalynn’s my secret weapon,” while on the presidential trial.

The couple also clashed and had disagreements, but they figured out the formula on how to settle this. In the book, Jimmy said they discovered long ago that disagreements were a part of life for “two strong-willed people,” adding:

“But we decided early on to give each other plenty of space.” 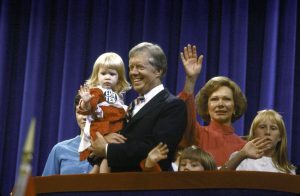 The couple also struggled to work together when they wrote their joint book, which was the “closest” they got to divorce. Rosalynn confessed that it was an awful experience, but they got through it.

During 2021’s PBS News Hour interview with the couple, the former President revealed how they worked through the troubles. He shared that they always reconciled before going to sleep.

Now the couple has been together for almost eight decades and going strong. They moved back home after their time in the White House and lived modest lives filled with enjoyable activities.

For instance, Jimmy’s dinner during a Washington Post interview was a broccoli and salmon casserole he ate on a paper plate. Showing how playful they were, he called out to his wife, saying, “C’mon, kid.”

Rosalynn laughed and took his hand before they walked through a neighbor’s kitchen. In 2018, it was the weekend routine for the 39th US President and his wife; they ate dinner at Jill Stuckey’s house, a friend.

The pair drank iced water from plastic cups and a glass of cheap chardonnay; then, they walked a half-mile back to their 1961 ranch house. Jimmy explained that his ambition had never been to be rich.

The former President lost his peanut business, and the couple worried they would lose everything else. Jimmy supported his wife by writing books, in a converted garage, about his life and career, with the publication noting:

“Carter is the only president in the modern era to return full-time to the house he lived in before he entered politics.” 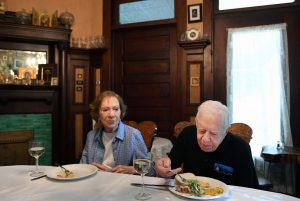 Former President of the United States Jimmy Carter and his wife, former First Lady Rosalynn Carter, having dinner at the home of Jill Stuckey on August 4, 2018, in Plains, Georgia | Source: Getty Images

He and his wife now lived in a “two-bedroom rancher” The active lives the couple led saw them walking daily down Church Street, and on some Sundays, Jimmy taught Sunday School at the church.

Their home boasts a tall magnolia, a pond (where Rosalynn’s husband practiced fly fishing), and a willow tree. The lawn by the tree was where the duo would be buried in graves marked with stones, which they knew would attract tourists and boost their hometown’s economy; the book described their home as such:

“Their house is dated but homey and comfortable, with a rustic living room and a small kitchen.” 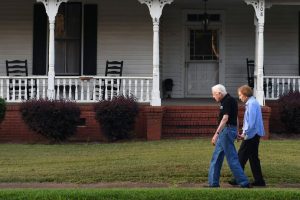 Former President of the United States, Jimmy Carter walks with his wife, former First Lady Rosalynn Carter, along with Secret Service on West Church Street after dinner at a friend’s home on August 4, 2018, in Plains, Georgia | Source: Getty Images

In the mornings, the former First Lady meditated and practiced Tai Chi while Jimmy swam in their pool or wrote in his study. He painted in the garage or built furniture when he wasn’t doing the other activities.

The couple watched “Law and Order” or Atlanta Braves games, and Jimmy would read sometimes. The pair often cooked together and made their own yogurt, and in the morning, Rosalynn mixed pancake batter and sprinkled blueberries they grew. 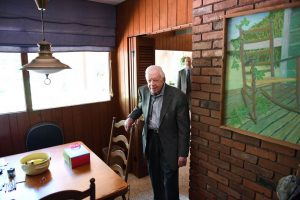 Former President of the United States Jimmy Carter at his home after a morning church service at Maranatha Baptist Church on August 5, 2018, in Plains, Georgia | Source: Getty Images

Her husband took over, cooked them on the grill, and did the dishes, while the publication noted: “His simple lifestyle is increasingly rare.” The couple revealed they were doing well during their PBS News Hour interview.

The former First Lady [Rosalynn Carter] and President [Jimmy Carter] also gave tips on how couples could patch things up after a disagreement.

The former President shared how he swam three times daily and walked a lot. He explained that they maintained their physical health as best possible with their handicaps and lived a restricted life before adding:

“Handicap in movement has brought us even closer together. So that’s one thing for which I’m thankful.”

A few years back, the couple beat an exceptional record in their marriage. In 2022, after years of marriage, Jimmy and his wife celebrated a significant milestone in their longstanding marriage.

The Record Rosalynn and Jimmy Beat and Their Wedding Anniversary
In 2020, People magazine noted how Jimmy and his wife celebrated 74 years of marriage. The couple became the longest-married presidential couple after breaking the record held by former President George H. W. Bush and his wife, Barbara Bush. 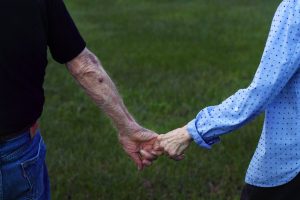 Former President of the United States Jimmy Carter walks with his wife, former First Lady Rosalynn Carter, towards their home after dinner at a friend’s home on August 4, 2018, in Plains, Georgia | Source: Getty Images

When Barbara died in 2018, she and her husband were married for 73 years and several days. In 2020, the Carters celebrated 76 years of marriage, beating their previous record.

The former First Lady and President also gave tips on how couples could patch things up after a disagreement. Jimmy said they tried reconciling and added, “We give each other kiss before we go to sleep still in bed. And we always read the Bible every night.”

The former leader of the US revealed that reading the religious book gave them a different aspect of their lives. Here’s to wishing the loving couple many more years of happiness together!