“Terminator” star Arnold Schwarzenegger had a marriage with Maria Shriver that lasted decades but came to a shocking end in 2011.

The couple’s divorce dragged on for ten years, all while the actor hoped his wife would forgive him.

While Maria opted to separate from the acclaimed actor, their son recently shared a photo that provided insight into the couple’s relationship post-divorce.

When news about his infidelity came to light, the media covered the story widely, and Arnold Schwarzenegger’s failing marriage to Maria Shriver was the talk of the town. The couple experienced all their challenging personal pain and heartbreak with the world watching.

Fans wondered if the duo would patch things up and get back together, but Maria felt much differently. For years many speculated about the couple’s relationship after their divorce, and in 2022 they finally got an answer via Instagram. 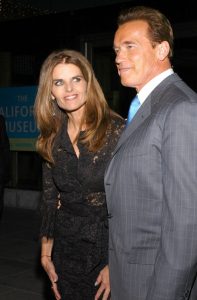 Arnold and Maria’s son Patrick Schwarzenegger celebrated his 29th birthday in September 2022, and to everyone’s surprise, both his parents were present. The former spouses were seen smiling and reunited at the family bash. Patrick’s post read:

Maria also shared a video montage celebrating her child. She described him as “amazing” and shared that he made the world better. The doting mom also thanked him for being loving and caring, noting that it was an honor just “being in [his] presence.”

The kids didn’t always have an easy time dealing with news about their parent’s failed marriage. The lengthy divorce proceedings started in 2011 but were only finalized in 2021.

Despite the separation and news about the actor’s disloyalty to his wife, Arnold swallowed his pride and tried to fix their longtime marriage.

The Actor Asked for a Second Chance
The acclaimed actor made headlines when news about his infidelity came to light. He admitted that he was unfaithful and involved in an affair with his family housekeeper, Mildred Baena.

The years-long cheating resulted in a consequence that stunned Arnold’s family and friends. The children who looked up to their dad never expected their family unit would be torn apart in the way it was.

To everyone’s shock, Arnold had fathered a son, Joseph Baena, with his housekeeper. It was kept secret for many years, and when the truth surfaced, the actor was immensely remorseful. He expressed:

“There are no excuses, and I take full responsibility for the hurt I have caused. I have apologized to Maria, my children, and my family. I am truly sorry.”

Arnold desperately wanted a second chance and hoped to reconcile with his wife. He believed their relationship could survive the ordeal and went down on his knees to ask for her forgiveness.

The actor was also in tears as he begged Maria to take him back. However, according to author Ian Halperin, she didn’t want any part of it.

Arnold confessed that cheating on his wife was the stupidest thing he ever did and added:

“It was terrible. I inflicted tremendous pain on Maria and unbelievable pain on the kids.”

Amid the divorce proceedings and separation, the actor held out hope for reconciliation. He remained positive against all odds and said:

“You can call this denial, but it’s the way my mind works. I’m still in love with Maria. And I am an optimist.”

The actor’s memoir, “Total Recall: My Unbelievably True Life Story”, also uncovered another shocking revelation — he had been unfaithful to Maria more than once.

It was a little too late to rebuild the marriage, and his former wife stood her ground, confident that she didn’t want to invite the actor back into her life.

The Couple’s Relationship after the Divorce
Arnold’s optimism wasn’t enough to convince Maria to give their relationship another chance, but the duo managed to be civil and friendly with each other. Over time, they worked on having an amicable relationship for the sake of their family.

Maria was present when the actor celebrated his 73rd birthday. His son, Patrick, shared a family photo featuring his siblings and his parents. Everyone had big smiles, suggesting that the air between Maria and Arnold was cleared.

It might have taken years, but the family’s Instagram photos tell a story of reconciliation and friendship between Maria and Arnold.

Maria possibly found it in her heart to forgive her former spouse based on her sentiments on the topic. Her words suggested that while forgiveness isn’t easy, it is possible. She stated:

“Forgiveness is letting go of the need to feel like a victim … Take it from me: If you’re struggling with forgiveness, be gentle with yourself because I’ve learned that forgiveness is a process, and it takes time.”

Despite their differences, the former couple still has one thing in common that unites them—their mutual love for being grandparents.

Maria and Arnold adore their grandkids and love spending time with them. Family comes first, and the duo’s daughter Katherine shared:

“They really love [being grandparents. It’s such a great and cool new role for both of them to be able to experience. Also, for me, as their daughter, to watch them in this new role is such a beautiful thing.”

Maria and Arnold’s children and grandchildren will forever be the thing that ties them together. While the actor’s dreams of reigniting their love story might not have materialized, he can find comfort in the unbreakable family connection he shares with his former spouse.

Maria has not allowed the cheating scandal to define her and regularly shares positive and uplifting content on her social media accounts. On Twitter, the journalist expressed:

“We are all capable of breathing kindness into our world and into the hearts of one another. Let’s commit to lifting each other up, not tearing each other down.”

Her former husband also seemed to have moved on with his life, and fans are grateful for the family photos, revealing that he is happy and healthy. Arnold also regularly posted joyful moments with his son, Joseph, and is proud of his five kids.