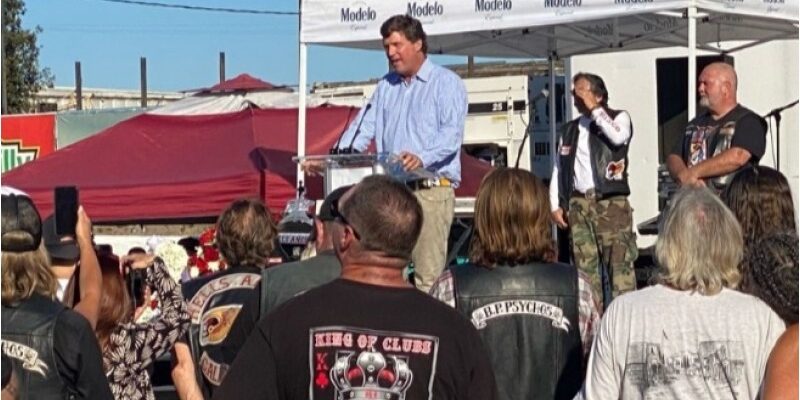 Fox News host Tucker Carlson shocked many when he made a surprise appearance at a tribute for a notorious biker. During his speech, Carlson had the crowd cheering when he asked a simple question. 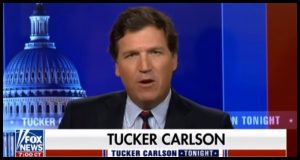 Tucker Carlson (Credit: YouTube)
Tucker Carlson said he “cleared his schedule” and flew 3,000 miles across the country in order to attend the tribute for Sonny Barger in Stockton, California. Carlson surprised thousands who had gathered at the Stockton 99 Speedway for the tribute to the longtime president and founding member of the Oakland chapter of the Hells Angels motorcycle club.

The Fox News host told the crowd that there were a few reasons he had made the long trek. “One, I’m from California,” he said. “I grew up here and I remember a different state. You remind me of the state I grew up in,” he added while thanking the few in the audience for smoking. “Because I haven’t smelled cigarette smoke in this state for 30 years… and thank you to those who are going to the Stockton gun show in a few days. I can’t believe this California still exists, and I’m really happy to see it still does.” 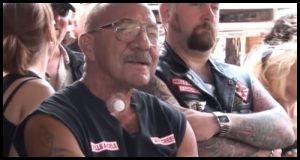 Hells Angels founder Ralph “Sonny” Barger attending a biker club salute (Credit: YouTube)
Carlson spoke about “cruising in my mother’s station wagon up the I-5” and seeing all of the vehicles immediately pull to the slow lanes as the Hells Angels motorcycles whizzed by the cars. “But that’s not why I’m here,” he said. “I never met Sonny Barger, but when he died, his letter to his wife and friends was released….and the letter, if I can summarize it from memory was: ‘Always stand tall, stay loyal, which made me emotional reading it, remain free, and always value honor.”‘ 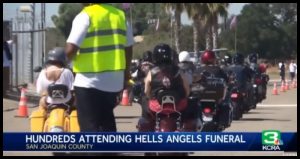 Biker clubs across the country came to pay tribute to Sonny Berger (Credit: YouTube)
“And I thought, that [phrase] came from Sonny Barger, the famous outlaw biker?” Carlson declared. “That’s Sonny Barger’s worldview? Why aren’t we hearing that from the people who run the country?” he asked the crowd. “Why is it left to Sonny Barger to say, ‘Stand tall, stay loyal, remain free, and always value honor?

Carlson continued to get applause when he took a swing at Joe Biden. “The president of the United States should be saying that every single morning as he salutes the flag, but only Sonny Barger is saying it,” he added. ‘And I thought to myself, I want to pay tribute to the man who spoke those words, and when I was invited to this funeral, I thought I don’t care how hard it is to get from Maine to Stockton, I’m going, and honored to be here.”

According to his obituary, Barger became “the epitome of the outlaw biker … an image he cultivated with charisma and shrewdness, turning Hells Angels into a worldwide brand. Though law enforcement saw the Angels as more of a gang than a club, in the 1960s the media latched on to Barger … selling the outlaw image to the world as a form of countercultural protest … in films such as Easy Rider (1969).”

Over the course of his life, Barger said he spent a total of about 13 years in prison. He faced time for some of his various convictions, including possession of marijuana, dealing heroin, assault with a deadly weapon, kidnapping, possession of firearms, and conspiracy to blow up a rival gang’s clubhouse, according to a report.

In Stockton, law enforcement warned of violence at Barger’s funeral, but the event passed without incident. Local media said about 7,000 people attended. Throughout the afternoon, the track infield was filled with people gathered in front of a stage decorated with rose wreaths where Barger’s family and friends spoke. Barger was a founding member of the Oakland chapter of the Hells Angels, which started in 1957.