Angie Dickinson and Burt Bacharach’s daughter Nikki struggled throughout her life since birth.

Nikki lived for 27 years without an accurate diagnosis and tragically died at age 40.

On September 30, 2022, Angie Dickinson will be turning 91! In February 2019, during a CBS News “Sunday Morning” interview, the “Police Woman” star revealed that she lived alone in Beverly Hills.

Sadly, the actress’s only child and daughter, Nikki, passed away long ago in 2007. Angie recalled to the publication how her child had been funny, intelligent, and wonderful to be around. 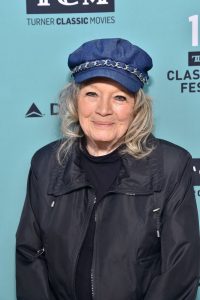 Angie Dickinson at the screening of “The Killers” at the TCM 10th Annual Classic Film Festival on April 14, 2019, in Hollywood, California | Source: Getty Images

Nikki was her child from her marriage to Burt Bacharach. The little girl was initially born three months premature and suffered from chronic health problems like Asperger’s syndrome and severe eyesight loss, but her mother recalled her fondly stating:

“Yeah, so all the memories of her are my best memories.”

The last time Angie was seen in the public eye was in October 2021 in Beverly Hills. The actress looked relaxed and healthy as she went out dressed in a dark gray vintage Guess sweatshirt written “Why Not Wear The Best” on the front.

The star also wore light gray long pants, a matching hat, and sneakers as she collected her mail. According to Daily Mail, it was the first time she was spotted in public in over three and a half years.

During her long life, Angie only had one child for whom she sacrificed so much. The child’s life was marred by a difficult pregnancy and an even more trying life which saw her being misdiagnosed.

Angie’s Special and Only Child
Nikki was born in the summer of 1966 at the apex of her parents’ career. Angie was a stunning actress who had shared the screens with stars like Frank Sinatra and John Wayne. 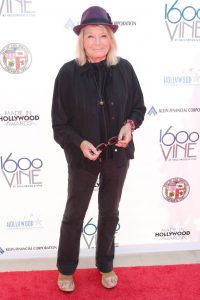 Angie Dickinson at the 1st annual Made In Hollywood Television Awards on August 15, 2013, in Hollywood, California | Source: Getty Images

The little girl’s father was a talented composer who wrote hits for Dionne Warwick, Dusty Springfield, and Tom Jones. His work earned him two Oscar Awards for his compositions.

Angie’s water broke three months before it was supposed to, and she had a risky pregnancy. It was recommended that the actress have bed rest, but she ended up with an infection. 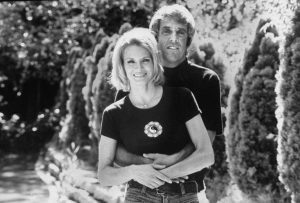 Burt Bacharach and Angie Dickinson posing for a photo in Beverly Hills in 1974 | Source: Getty Images

She thought the premature baby wouldn’t make it alive when she rushed to the hospital, but Nikki did. The star’s child was born an over fragile, tiny newborn baby weighing one pound and ten ounces.

Nikki was immediately placed into a preemie isolette, an enclosed incubator, where she lived for nearly three months. The baby girl left the hospital weighing about five pounds, but as Angie wrote in her LA Mag essay, “she looked normal and contented.” 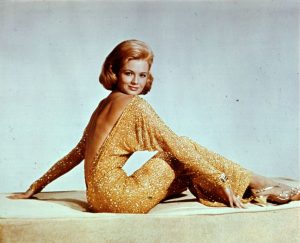 Before Nikki was one, her health issues began. In her piece, the actress revealed how her daughter started having difficulties with her eyes before being diagnosed with strabismus.

The little girl didn’t speak until she was three years old, but that didn’t affect Nikki’s ability and development in other activities. She thrived in ballet, gymnastics, horseback, swimming, and scuba diving. 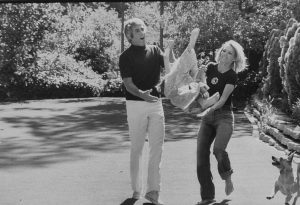 Angie’s daughter also played the piano like a prodigy at four. She could make up songs, lyrics, and rhythms, and her mother noted that her talent might have come from her father.

Most of Nikki’s struggles were connected with her Asperger’s syndrome diagnosis. The syndrome was previously used as a diagnosis on the autism spectrum, but the main issue for Angie’s daughter was her coping mechanisms. Headshot of Angie Dickinson, US actress, circa 1965. | Source: Getty Images

Someone diagnosed with Asperger’s was incapable of coping with virtually anything. The actress shared about her daughter’s “inability to cope,” noting how noise bothered her and she couldn’t handle fear, strain, disappointment, sadness, frustration, anxiety, loss or the fear of it, and abandonment, adding:

“You have no way of blowing it off. It affects every breath you take.” 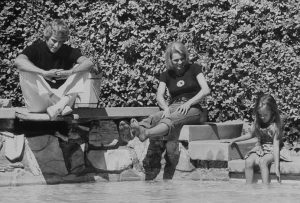 Sadly, Nikki’s troubles needed special attention, which led her mother to sacrifice her booming career. Angie had to choose what she loved the most between her acting and her child; ultimately, she ended up losing the latter.

Angie’s Career Sacrifice and the Loss of Her Only Daughter
The syndrome Nikki lived with took its toll on her mother’s personal and professional life. Angie decided to work less until her child was seven so that she could give her the special attention she needed while still acting. 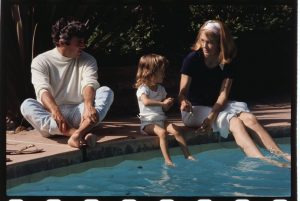 Burt Bacharach, Lea Nikki Bacharach, and Angie Dickinson on the grounds and around the swimming pool of their Hollywood home on June 3, 1969 | Source: Getty Images

The Hollywood actress credited her daughter’s progress to the extra attention she gave her. The star explained in the publication:

“The total love and the total joining. I was continually keeping her connected, talking to her, hugging her, keeping her in a realm of comfort and familiarity.” 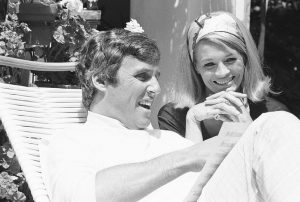 She and Burt decided to enroll Nikki at the UCLA Lab School, an experimental elementary school for children of all backgrounds, some of them disabled. The girl suffered bullying and was constantly criticized, but she still made friends.

As Nikki got older, her mother described her as “excessive” due to her inability to deal with and cope with most everyday things. She often kicked walls or tore book pages out of sheer frustration.

Burt and Angie were confused as they couldn’t fully comprehend how one could have mental retardation and still play the piano wonderfully, do well at school, and make friends. Nikki started going to therapy then Burt diverted her to psychiatry. The psychiatrists couldn’t understand the couple’s daughter and thus had no answer to the child’s issues. As the problems increased, the parents couldn’t find ways to deal with her any longer and sent her to a mental institution.

Nikki stayed at Faribault, Minnesota’s Constance Bultman Wilson Center, for ten years. According to Angie, her daughter performed “amazingly well” despite the center’s inability to help her.

In 2000, the actress found an article about Asperger’s and finally knew what her daughter had! People with Asperger’s often had high intelligence and vast knowledge of narrow subjects but lacked social skills, which made sense to Angie. 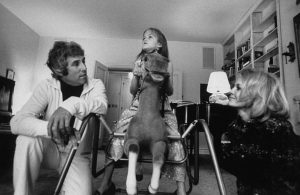 Nikki’s diagnosis escalated and worsened throughout the last ten years of her life. After trying everything, Angie saw only one way out – that she needed to dedicate 100% of her life to her daughter.

Angie’s [Dickinson] ex-husband [Burt Bacharach] said he never read the note because he knew what was in it. 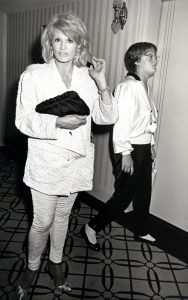 She said it worked and mother and daughter did everything together from that day on. Sadly, at 40 years old, Nikki took her own life, leaving her parents surprised and filled with a lot of sorrow.

After her death, Burt came up with the idea to write a memoir in her honor. It took him more than five years to release the biography “Anyone Who Had a Heart: My Life and Music.” 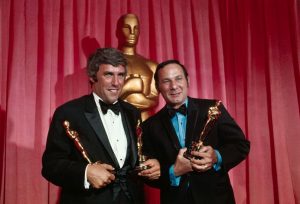 For “Best Song in a Movie” for 1969, composer Burt Bacharach (left) and lyricist Hal David hold Oscars they won for “Raindrops Keep Falling on my Head” from “Butch Cassidy and the Sundance Kid,” at the Academy Awards. | Source: Getty Images

Burt’s memoir revealed that revisiting the memories of his daughter was very tough and emotional. Despite Nikki’s threats of committing suicide, because she got to a point she couldn’t handle helicopter noises, her father said he never really thought she would do it, telling USA Today:

“You hear that enough and you know it’s never gonna happen and then one day she just goes and kills herself.”

Burt and Angie divorced when their daughter was young. The actress appeared in television shows and movies until 2009, while her best-known performance was in the ’70s TV drama “Police Woman.” 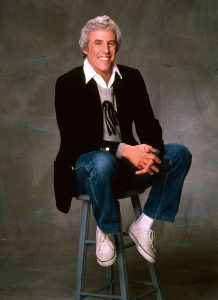 Her other roles included appearances in “Ocean Eleven,” “Sabrina,” and “Dressed To Kill.” Burt, an award-winning composer, had classics such as the Oscar-winning “Raindrops Keep Fallin’ on My Head,” “The Carpenters’ (They Long to Be) Close to You,” “I’ll Never Fall in Love Again,” and continued making music.

He was still, however, haunted by his daughter’s death as she’d left him a note when her body was discovered in her apartment. Angie’s ex-husband said he never read the letter because he knew what was in it.

The National Suicide Prevention Lifeline is 1-800-273-8255. Other international suicide helplines can be found at befrienders.org.