Hollywood star Tyler Perry is known for being a comedic genius, but many might be surprised to learn about his giving heart. The filmmaker was so touched by Prince Harry and Meghan Markle’s love story that he did something unexpectedly generous. After facing personal heartbreak, he even revealed that he wanted what they had.

Media mogul Tyler Perry shines on the movie screen, but behind the camera, he has a kind heart and passion for true love. After separating from his longtime girlfriend with whom he shared a child, he revealed that he was looking for something special.

The actor became more specific and said he longed for a relationship similar to what a famous couple had. He was referring to Prince Harry and Meghan Markle’s beautiful romance and told fans the heartwarming reason he offered them his luxurious home when they were in need. 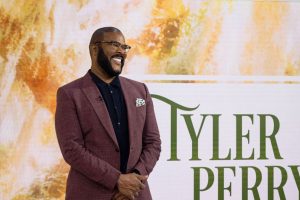 Tyler recently opened up about a much-speculated experience. People worldwide wondered how he was connected to the Duke and Duchess of Sussex, and he gushed about their inspiring bond and how it endured against all odds.

He also expressed his desire to find something like what they had. The acclaimed filmmaker wished the world knew the true love between Harry and Meghan because he was deeply touched once he witnessed it for himself. He said:

The friendship between Tyler and Meghan started in 2018 when she tied the knot with Prince Harry. The filmmaker promised he would always have the couple’s back even though they hadn’t met in person yet. Meghan shared:

“Sometimes, you can tell your life story to a stranger on a plane as opposed to some of the people that are closest to you.”

Aside from offering his support and advice, Tyler also told the couple he was praying for them. Little did Meghan know she and her husband would take the filmmaker up on his promise down the line.

Tyler Perry was true to his word after Meghan confided in him about their complex situation. They decided to step down from their roles as senior royals and needed a safe place to stay in America while they found their feet.

Tyler became the unlikely hero in Meghan and Harry’s story. When they required security and a roof over their head, the comedian didn’t hesitate to help.

Tyler Perry’s Unexpectedly Generous Offer
The filmmaker offered the couple the option of staying in his luxurious Beverly Hills home. Along with the residence, Tyler also threw in a much-needed element: security.

The safe house was beautiful and the perfect place for the couple to assess the road forward. The temporary home was fit for a prince and featured various impressive features, including chandeliers, marble archways, and a glorious outdoor terrace.

The home was estimated to be worth £15 million (about $16 million) and offered Meghan and Harry the privacy they desired. The couple’s young son Archie was also taken care of and stayed in a nursery that had a blue and white color scheme.

While no expense was spared in the design and interior of the home, it displayed much more than that. The true revelation was Tyler’s generosity—by helping the couple, fans saw another side of the filmmaker.

Meghan and Harry resided in the lavish home for three months and gained what the Duchess called “breathing room to try and figure out what [they] were going to do.”

Tyler ultimately offered the couple his support in 2020 because he saw they were struggling and knew it was a “very difficult time” for them.

The billionaire media mogul especially sympathized with Meghan, a “biracial American [marrying] a British royal,” and he was happy to help her and Harry in any way possible.

For Tyler, the couple’s fairytale love story was something he appreciated. He had been through a tough time in the relationship department, and their unique bond gave him hope.

Tyler Perry Opened up about His Midlife Crisis
Tyler was a force of positivity and joy, but like everyone else, he also endured challenging seasons. In 2020 he revealed that he was no longer in a relationship with his longtime girlfriend, Gelila Bekele.

He was single and over 50, something he had never imagined for himself. Separating from his partner, who was also the mother of his son, was tough, and the filmmaker was uncertain about the future. On Instagram, Tyler wrote:

“This is what a midlife crisis looks like. I’m 51, single, and wondering what the next chapter in my life will look like.”

The rest of the filmmaker’s online post contained sentiments of hope amid the challenges. He looked forward with his head held high and believed peace and goodness were still ahead.

Sources revealed that the couple had already been separated for some time when he made the announcement. However, despite going their own ways, they were still friends and focused on being the best parents for their son, Aman.

While Tyler’s life has been centered around building a successful media empire, he never neglected to make room for friendships that would arguably stand the test of time.

The bond between Tyler, Meghan, and Harry seemed to blossom even after they moved out of his home. He gifted the couple a lavish housewarming gift—a grand piano.

With the present came the instruction: “Write the soundtrack for your life.” It was the perfect gift for people stepping into a new phase of life.

Tyler’s commitment to helping everyone around him was inspiring and meant a great deal to Meghan and Harry. While the filmmaker remained in awe of the couple’s love and how they found each other against all odds, they remained in awe of his kindness and generosity.

Lending Harry and Meghan his home was an easy decision for the media mogul and is a testament to the kind-hearted person he is behind the scenes and away from the glitz and glamour.