Prince Harry and Meghan Markle reportedly wanted to move to a “suite of apartments” in Windsor Castle, but the Queen didn’t allow them.

Frogmore Cottage is “essentially her back yard” that the monarch gave to the royal couple.

Since the release of a new book centered on Prince Harry and Meghan Markle’s lives, several revelations have focused on the couple’s experience while still living in England. The late monarch reportedly snubbed the pair in terms of residence following their wedding. Her Majesty was wary about the decisions the newlyweds made.

Prince Harry and Meghan Markle walked down the aisle on May 19, 2018, at St George’s Chapel in Windsor, England. The bride donned a Givenchy wedding dress designed by Clare Waight Keller, which caused quite a stir, especially for the reigning monarch, per Cosmopolitan. 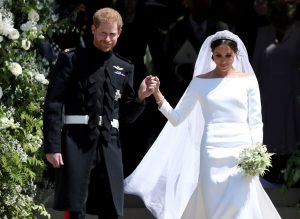 Prince Harry and Meghan Markle depart after their wedding ceremony at St George’s Chapel at Windsor Castle on May 19, 2018 in Windsor, England | Source: Getty Images

Katie Nicholl, a royal reporter, claimed in her book “The New Royals” that Queen Elizabeth II wanted Markle to wear off-white like Camilla Queen Consort did when she married her son King Charles III.

Nicholl revealed that Her Majesty had “reservations” about the Duchess of Sussex’s “pure white Givenchy dress.” According to an insider, she was somewhat stunned by Markle’s bold option. The royal matriarch had a particular belief that had been known for generations:

“She believes if you’ve been married before, you wear off-white on your wedding day.”

Notably, because Her Majesty wanted to welcome the new addition to the Royal Family, she did her best to learn more about the new Duchess of Sussex. 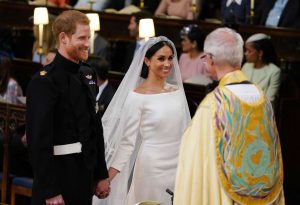 Prince Harry and Meghan Markle stand together at the High Altar during their wedding ceremony in St George’s Chapel in Windsor Castle on May 19, 2018 in Windsor, England | Source: Getty Images

Nicholl’s book unravels how the monarch felt about Markle and Prince Harry’s decisions. When the couple shared they wanted to live in Windsor after their wedding, the sovereign decided to give them a house at the back of her yard instead.

The Sussexes Could Not Live in Windsor for a Reason
The former actress and the prince had their eyes set on some “apartments at Windsor Castle.” However, Her Majesty had other plans as she gifted them the Frogmore Cottage, Nicholl claimed in her book.

She said when the royal couple announced they were moving office from Kensington Palace; the monarch gave them the cottage “in Windsor Great Park as their new home.”

Nicholl wrote that although it was not the ideal home that the royal couple had wished for, Lady Elizabeth Anson, who passed away in 2020, said: “It was a generous gesture nonetheless,” adding the space was of significance to the Queen.

Anson explained that the monarch’s garden entrance was right beside the Duke and Duchess’ cottage. She revealed that it was the monarch’s backyard, her sanctuary, “solitude and privacy,” and she gave it in a sense of gifting it to the Sussexes.

Anson shared that she and others thought it was admirable for the Queen to go through such great lengths for her grandson and granddaughter-in-law.

That said, Markle and Prince Harry moved into Frogmore Cottage a year after they got married, but within a month, the pair moved their royal household from Kensington Palace to Buckingham Palace.

The move came after tension arose between the Sussexes and the formerly known Cambridges, Prince William and Kate Middleton, which Nicholl noted that it saddened the sovereign.

When Markle and Prince Harry relocated to the US in January 2020, they left their cottage without tenants. However, later on, the space got occupied by the prince’s cousin, Princess Eugenie, and her husband, Jack Brooksbank, but the couple has since left the cottage after announcing their move to Portugal.

Since then, there have been no occupants at the place following the Sussexes’ decision to extend their lease. The duo renovated the home and stayed there during the Platinum Jubilee celebrations in June 2022. 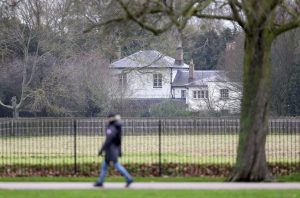 Interiors Therapist and Feng Shui Consultant Suzanne Roynon previously talked to Express about the interior design of the property, saying:

“In Feng Shui terms, after the significant renovations of 2019, Frogmore Cottage would be regarded as a ‘Bad for People/Good for Money’ property.”

Roynon explained that the Sussexes opted for neutral colors, white, cream, and gray, in their former home, which they also went for at their new home in Montecito, California.

She emphasized that although Princess Eugenie and Brooksbank may have added their personal touch to the house, the Duke and Duchess’s “original relaxed and elegant styling” would still stand out from the space:

“They provide a tasteful, soft base which would work in any home.”

The sovereign must also figure out where he would live as the new reigning monarch and who would get the keys to other properties. The King is now the landlord of several properties following his accession to the throne.

According to the outlet, Buckingham Palace is the traditional residence of the monarch, which King Charles II first occupied in 1761. 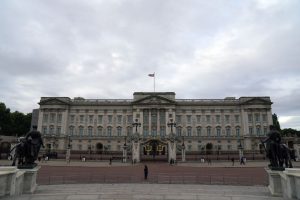 However, it is believed that the new head of state is not in favor of the palace serving as the headquarters and may only use it as an “office.” Currently, he seems keen to keep using Clarence House – where he has resided since 2003 – as his home.

While His Majesty still needs to sort out his official London residence, other Royal Family members are awaiting to find out where they will move next.

It is understood that the shuffle would affect Prince Andrew, who would be required to move out of the Royal Lodge in Windsor Great Park. The Duke of York has lived in the 30-room house since moving out of Sunninghill Park in 2007. 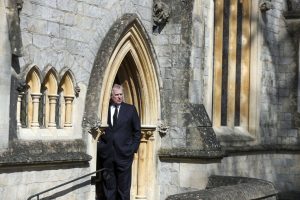 Prince Andrew, Duke of York, attends Sunday service at the Royal Chapel of All Saints, at Royal Lodge on April 11, 2021 in Windsor, England | Source: Getty Images

Meanwhile, Markle and Prince Harry could be kicked out of their Frogmore Cottage following their permanent move to North America. The Duke and Duchess of Sussex moved into their Georgian-styled home in April 2019.

King Charles should also make an informed decision with other royal residences throughout the country, including Highgrove House, Sandringham, and Windsor Castle.