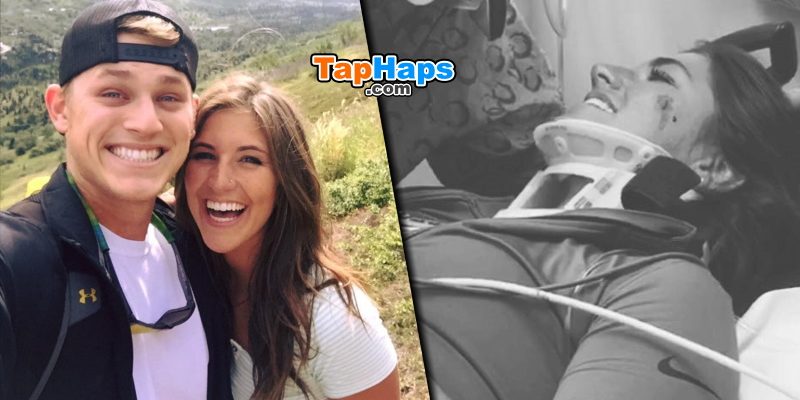 A young woman was riding in her boyfriend’s truck when he struck a pillar, going 75 mph.

Crushed in the mangled wreckage, she opened her eyes to see his head had gone through the windshield. His face was covered in blood, and his body lay motionless. Then, she glanced out the window and saw a man smiling at her. Even more shocking than the stranger standing in the road, however, is what was later found at the scene of the crash. 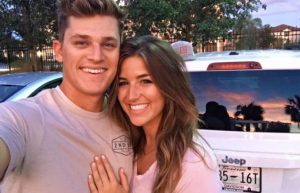 Arika Stovall and Hunter (Photo Credit: Facebook)
Arika Stovall was riding in the passenger seat of her boyfriend Hunter’s truck when it drifted off the road and slammed into a pillar at 75 mph, reducing the once-formidable vehicle to a heap of scrap metal with Arika trapped inside. The impact should have “chopped our bodies in half,” Arika admitted, but miraculously, she was still alive and even able to open her eyes.

Just seconds before the impact, Arika was certain she and Hunter were sliding towards certain death. As the truck drifted from the road, Hunter had just three seconds to react as they sped head-on towards a concrete pillar. His split-second reaction would either save their lives or seal their fate. Luckily, Hunter “did exactly what he needed to do to make sure my life didn’t end,” Arika recalled. But, she knows he didn’t act alone. Arika Stovall and Hunter were headed straight for this pillar. (Photo Credit: Facebook) 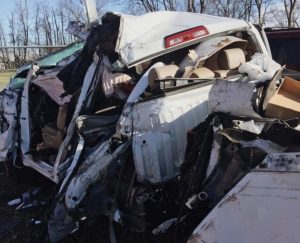 The aftermath of the crash. (Photo Credit: Facebook)
“God helped Hunter to respond exactly the way he did behind the wheel, guiding the truck exactly where he should have to be able to avoid smashing head-on into the pillar,” Arika wrote in a Facebook post. “That doesn’t just happen. God doesn’t throw protection around like that for no reason. He does it because he’s not finished with us.” That’s not all God did that day, either.

Arika couldn’t believe what she witnessed next. Trapped with no one around to see that they desperately needed help, Arika panicked and began to scream. Her eyes anxiously searched her surroundings, first looking towards the driver’s seat. Hunter, whose head was through the windshield, wasn’t moving and wouldn’t respond. 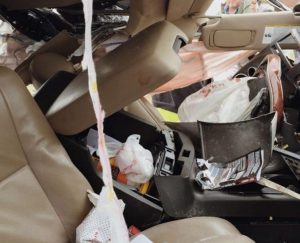 Arika Stovall was trapped inside the truck after the crash. (Photo Credit: Facebook) 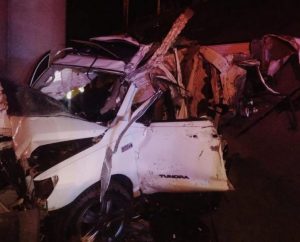 Hunter was bloodied and motionless, and Arika felt helpless — but that all changed the instant she looked out the truck’s window. “There was a man — bright with a big white beard. No other cars in sight — just this man,” Arika recalled, and she knew exactly who he was. “He was my guardian angel. He saw me and immediately told me that an ambulance was coming.”

Although Arika isn’t sure if she was in a dream state or seeing a glimpse of heaven, she said, “I knew in that moment was that Hunter was safe with me.” But, the sight of the smiling man gave her something more than just affirmation that Hunter would be okay. As she kept her eyes on him, Arika was protected from further trauma. 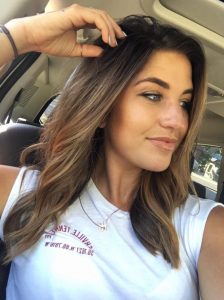 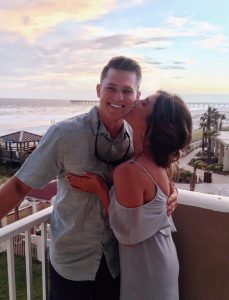 Arika Stovall and Hunter (Photo Credit: Facebook)
“This man — looking at him for a short moment — helped me not witness Hunter being peeled out of the truck. I believe if I saw that I would have had a heart attack,” Arika explained. Instead, this beaming, bright vision kept her attention diverted.

Then, the stranger simply walked away, and when Arika blinked, a flashlight was suddenly shining in her face. The paramedics had arrived, and Arika and Hunter were about to experience yet another miracle. 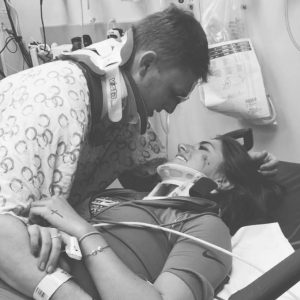 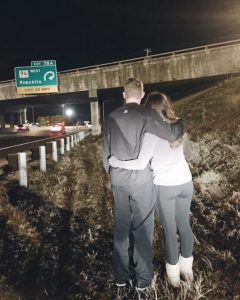 “Here is the miracle part: no broken bones, concussions that lasted not even 24 hours, no internal damage, and just a few stitches in my knee and hunters face,” Arika wrote. “Only that after an accident that paramedics wonder how we didn’t die instantly and a truck that looks like it’s been through a tree grinder.”

Both Hunter and Arika were released from the hospital not even 48 hours after entering. And, again, they would receive yet another miracle. When they returned to the scene of the crash, they found Hunter’s Bible, “open, with a page marked with scripture telling us to not be afraid; Jesus is with us,” Arika said. 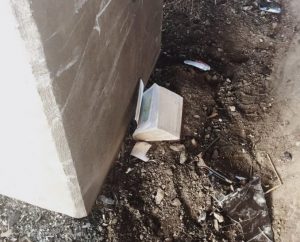 Hunter’s Bible was found at the scene of the crash. (Photo Credit: Facebook) 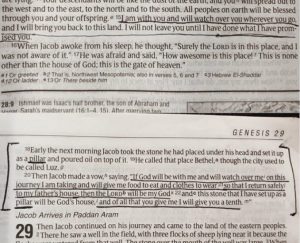 “The only thing left behind at the crash scene is Hunter’s Bible open, with a page marked with scripture telling us to not be afraid; Jesus is with us,” Arika Stovall explained. (Photo Credit: Facebook)

“I’m in awe of the presence of God in this entire situation. Every part of this experience we went through points directly to Him,” Arika wrote. “I am amazed. Absolutely taken away by the presence of God, so blessed for him sending me an angel, so thankful for Hunter and his second chance at life, for his healing and health.”

Arika closed with a prayer for all of us who read her incredible story, which is proof of God’s unwavering plan for each of us and that nothing in this physical world can derail what He has already determined. “Tonight I’m praying for all of you,” Arika Stovall wrote. “I want everyone to know the love and the power of God,” she continued. 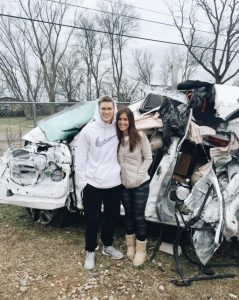 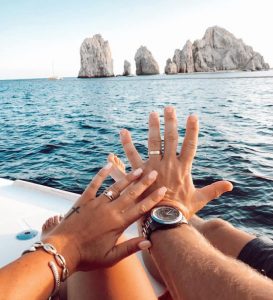 Arika and Hunter Hanks have since become husband and wife. (Photo Credit: Facebook)
“He has a purpose, and it’s so clear that nothing, not even a car accident like this one, will cause His plans for you to change,” Arika explained. “I’m praying that everyone who reads this can get a glimpse of God’s faithfulness. He is good. And working. And the plans he has for you and your life aren’t going anywhere,” she declared.

“Good or bad … it’s God’s doing. It’s his plans unfolding. It’s his kingdom coming. Embrace the struggles and the joys of this life! Without a doubt, it’s a miracle we’re alive, but more than that, it’s simply Gods plan for us. We’re so grateful for this wreck,” Arika added, saying she’d endure it all again if it meant helping more people know God. “We are blessed to be okay. And so in love with the amazing God we serve.”