When my dad died, his dog Max appeared at my door and seemed like he wanted to go somewhere. I took him to my dad’s grave and sat with him for hours until I realized he was not breathing anymore. I will never forget what I learned that day.

“Carla, are you sure you don’t want to take Max?” my stepmother, Paris, asked, just as I was about to leave her home after my father’s wake, the day after his passing. She was talking about my dad’s dog, a beautiful rescue just as old as my father. He used to joke and make bets on who would die first, and unfortunately, my father died, leaving poor Max to grieve alone. 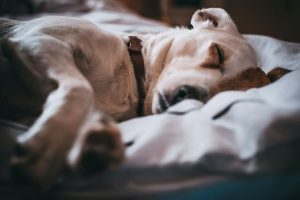 “I can’t. Max is sleeping on dad’s bed. I think he would prefer to stay with him,” I replied, shaking my head sadly at my stepmother.

I swear I was like he said, “Hurry up!”
She pursed her lips and nodded solemnly. “I guess you’re right. Ok, I’ll call you tomorrow, honey. Have a good night,” Paris agreed, hugged me tightly, and waved goodbye.

I walked home because I lived only three blocks from my dad’s house in a suburb in Virginia, and I had just taken off my black dress when I heard howling at my door. I would recognize that noise anywhere. It was Max. 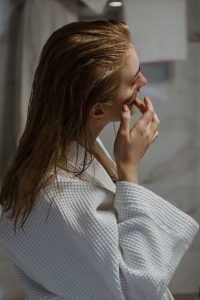 I grabbed a robe and rushed to the door, only to watch the pup enter my house as if he had done it often. He picked a spot on my carpet and plopped down closest to the fireplace. Max sighed as if the world’s weight was on his shoulders, and I felt terrible for him. However, having him here actually gave me peace.

I had a shower and dinner and fed Max from the bag of dog food I always kept home, even though I didn’t have my own pet. I went to sleep, and Max followed me as if he was watching over me as my father did when I was a little girl. I patted his fur as fresh tears welled in my eyes, and memories flashed of my dad, who was a wonderful man.

The next morning, I was woken by Max’s barking. The dog was so old that he barely ever barked. He only howled as best he could. But this time, he was barking, so I rose from my bed, scared something had happened and saw him standing by the door. He looked at me expectantly, so I opened it and thought he just needed to pee or poop. 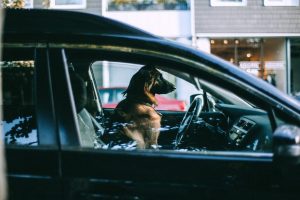 But Max went right to my car and waited for me. “What do you want, boy?” I asked again, frowning.

I swear It was like he said, “Hurry up!”

So, I dressed quickly, opened the passenger door, watched him get in, and then went around the car to the driver’s side. Max sat there and looked out the window as if he knew where he was going. But I was confused. “Where are we going?” I asked as if he could answer.

But the dog turned to me and stared with deep-set eyes, and I knew immediately. He wanted to see my father, which he had not been allowed to do during the funeral. But I could take him now. We arrived at an empty cemetery and walked to my father’s grave. 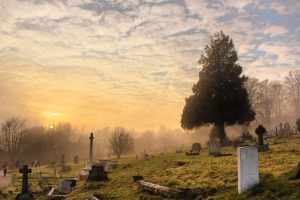 Astonishingly, Max knew exactly where my dad lay. I did not guide him or anything. The dog plopped down like he had done on my rug yesterday and breathed. So, I sat beside him, talking to my father, spoke to Max, remembered how great my childhood had been, etc. It was the most peaceful moment I had had in the past two days since I received the call from my stepmother, telling me Dad had passed.

A few hours passed without me noticing, and I realized I had to go. I was hungry and tired, so I jostled Max, but he didn’t move, and my heart jumped in my chest. I watched his diaphragm for any breathing, and there was nothing.

“Oh, sweet boy. You came here to be with him,” I whispered and cried for him, but even through the tears, I envisioned my father reuniting with Max in whatever afterlife they reached. I smiled at the thought.

I left that cemetery feeling better than I had after the funeral, which was just depressing. I knew my father had a great life and the best companion anyone could ask for, who was now with him too. After arranging for someone to pick up Max’s body and have him buried next to Dad, I went right to the local shelter. It was time for me to have a buddy of my own.