Riverdance is something that almost everyone is familiar with. Riverdance has become an iconic Irish classical dance routine that captivates many generations, whether as a musical or theater production.

The original show toured for more than 20 years, and over 25 million people saw it live. Riverdance’s history has been recognized all around the world, with people appreciating the amazing footwork of the dance. 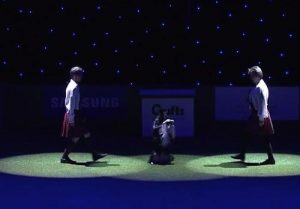 The entire show is a never-ending thrill ride brimming with energy, emotion, and excitement. This could be one of the reasons why this on-stage spectacle has been remastered and performed for decades by pros and amateurs alike. It may appear that there isn’t much that can be done to keep the show fresh after so many years. 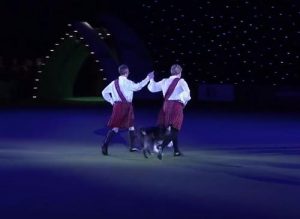 When Mary Ray and Richard Curtis invited an exceptional guest onstage to perform a Riverdance-inspired number with the duo, they disproved that theory. When Mary and Richard brought Levi out at the recent Heelwork to Music Competition, the audience was taken aback. Levi, on the other hand, isn’t your usual entertainer. Levi is a puppy! 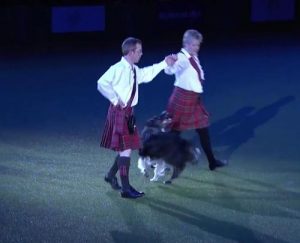 Levi was giddy as he pranced out with Mary and Richard, his handlers clicking their heels to the upbeat music playing in the background. Levi arrived at his allocated location and sat back in his usual beginning stance, even crisscrossing his front legs to announce the upcoming dance. As the music progressed, it became clear that Levi had had extensive training. To the amazement of the rapt crowd, the dog danced around to the music and frequently performed spin moves. Everyone who saw the performance was blown away by how well Levi performed and how much he clearly enjoyed himself. Mary Ray is England’s leading dog trainer and a master dog handler with a long history.

See the enchanting performance in the video below: