Meghan Markle arrived with Kate Middleton and her kids at the Queen’s state funeral.

Both women paid tribute to the late monarch with their outfits.
Kate and Meghan got mixed reactions from fans on their look, and fans defended the Princess.
Queen Elizabeth II’s state funeral was held on September 19, 2022, and was attended by all royal family members. Among those in attendance were sisters-in-law Princess Kate and Meghan Markle.

The pair have not been close in past years because Meghan and Prince Harry stepped down as senior members of the royal family, which caused a rift between the brothers and their wives.

Catherine, Princess of Wales, Prince William, Prince of Wales, Meghan, Duchess of Sussex and Prince Harry, Duke of Sussex pay their respects in The Palace of Westminster after the procession for the Lying-in State of Queen Elizabeth II on September 14, 2022 in London, England | Source: Getty Images

However, Princess Kate and Meghan arrived together at the Queen’s state funeral, as reported by “Metro UK.” They had Princess Kate’s two eldest children, Prince George and Princess Charlotte, with them, says “Elle.”

The pair arrived together, but Meghan walked into the funeral next to Sophie, Countess of Wessex. Once inside, Meghan again went to stand next to Princess Kate and the children.

The sisters-in-law stood side by side as the service for the Queen began, and Meghan was seen wiping away tears as the ceremony concluded. Princess Kate is also thought to have had a close relationship with the late monarch. 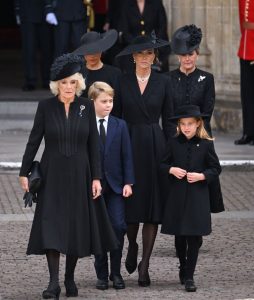 Prince Harry and Meghan were made to sit in the second row behind disgraced Prince Andrew and non-working royals. They sat immediately behind King Charles III and Queen Consort Camilla but were far from Prince William and Princess Kate.

This seating arrangement came after Prince Harry was forbidden from wearing his military suit during the funeral and after his grandmother’s initials were stripped from his uniform as he held a vigil for her. 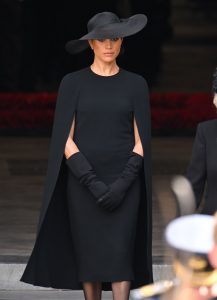 Meghan, Duchess of Sussex during the State Funeral of Queen Elizabeth II at Westminster Abbey on September 19, 2022 in London, England | Source: Getty Images

Princess Kate and Meghan paid tribute to the Queen with their outfits, but fans had mixed reactions about what each woman was wearing to bid their final farewell to the Queen. 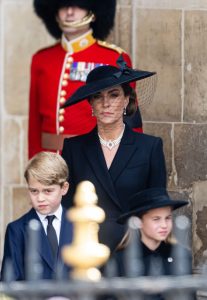 Each woman subtly paid tribute to the Queen by wearing jewelry that connected them to her. Princess Kate wore a pearl necklace that was often seen on the Queen.

The pearls were a gift from the Japanese government to the Queen in the ’70s, and the late monarch wore them to Margaret Thatcher’s 70th birthday party in 1995.

The pearls comprise four strands and are held together by a diamond in the middle of the piece. Princess Kate wore the same necklace to the Queen and Prince Philip’s 70th anniversary and then again at Prince Philip’s funeral. 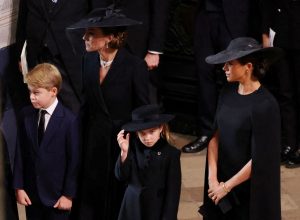 The princess paired the priceless choker with a pair of pearl drop earrings. These were a gift to Queen Elizabeth II from the Hakim of Bahrain for her wedding.

Meghan also paid tribute to the Queen through gifted jewelry that solidified her connection to the late monarch. She donned a pair of pearl and diamond stud earrings, given to her in 2018.

The earrings are significant because they were a gift from the late monarch and the earrings that Meghan wore in her first and only joint appearance with the Queen in July 2018. 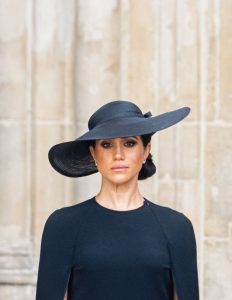 Meghan, Duchess of Sussex during the State Funeral of Queen Elizabeth II at Westminster Abbey on September 19, 2022 in London, England | Source: Getty Images

Each woman wore a black dress with black stockings and a black hat to honor the Queen. Princess Kate’s hat was offset by a black veil covering most of her face.

While there were subtle differences in their hats, for the most part, they were wearing a matching set. Each hat tilted to one side, and they were both wide-brimmed, reports “Hello!”

How Fans Reacted To Meghan and Kate’s Look
While the world mourned its longest-reigning monarch, Princess Kate and Meghan fans were enthralled with their outfit choices and took to Twitter to share their thoughts.

Meghan wore a black dress with a cape and paired it with long black gloves, which fans loved. One fan commented:

“Everything about Meghan’s look is so stunning and graceful.”

Many people agreed with the sentiment, as the post received over 1000 likes. Another fan mentioned that Meghan was the “it girl” despite Princess Kate’s presence.

Another Twitter user wondered what Princess Kate was using on her face as she looked old and would look older than her years by the time she reached 50. The user also said that Meghan looked beautiful.

One user took to Twitter to post a close-up of Princess Kate, saying that she was “being extra” and looked like Joan Collins in the 1980s. Another user commented on that post, saying wearing the Queen’s jewelry was a power play.

A user who appeared upset by the fact also remarked that Princess Kate looked old at the state funeral, while another mentioned that one photo of Meghan looked like it belonged in a museum.

It seemed that the actual drawing card regarding Meghan’s outfit was her choice to wear elbow-length black gloves, which Twitter users loved.

While some mocked Princess Kate for looking old and mentioned that Meghan looked better, some came to Princess Kate’s defense.

One user mentioned that comparing Princess Diana’s and Queen Elizabeth’s funerals was unnecessary as they were not identical. Another defended Princess Kate by saying:

“They both looked stunning. You don’t raise one by bullying another.”

One tweet mentioned that the fans were the problem as they initiated “needless comparisons” between the sisters-in-law, while another thought people might be upset that Princess Kate is the future Queen.

An impassioned Twitter user said Prince Harry would disapprove of fans complimenting his wife at the expense of Princess Kate. He then mentioned that people were criticizing Princess Kate’s weight much like Princess Diana.

Despite many fans mentioning that Princess Kate looked old, some fans said she looked lovely. One said that she was an excellent example of elegance and femininity.

Another fan admired Britain on the funeral day and said that Princess Kate looked classy and elegant. They then admired how lovely it was that she paid tribute to the Queen with the pearls she wore.