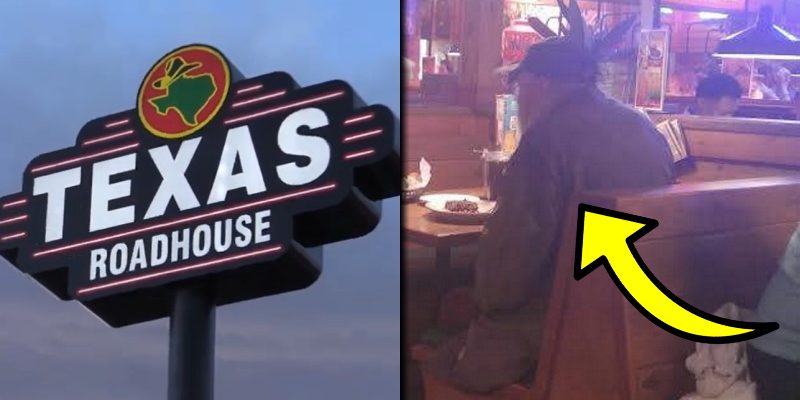 While out to eat at a local Texas Roadhouse restaurant, a veteran at a booth captured another customer’s attention. After watching the vet and overhearing what was being said, the fellow patron immediately called for a manager.

A Georgia customer, only identified as C Sparks, had taken her mother out to eat at a Texas Roadhouse restaurant in Savannah when their attention became focused on a veteran at a nearby booth, according to Love What Matters. As they sat and watched the older man, they couldn’t help but notice what was taking place at the veteran’s table.

As Sparks watched and listened, she not only noticed what was taking place at the other booth but also other people’s reactions as they walked by. When the fellow diner and her mom decided to do something about what they saw and overheard, she got a surprising answer that she didn’t expect. Describing the situation in a Facebook post, C Sparks said she noticed the gentleman with long gray hair and a scruffy beard sitting at the outside patio while waiting to be seated in the restaurant. She realized the man was a veteran since the patches on his jacket stood out to her, showing that this proud patriot had seen a lot in his day, while honorably defending our country. As impressed as C Sparks was with this stranger’s sacrifice, it did not appear that other patrons were.

According to Sparks, the vet was friendly to each and every person who walked by, with not a single customer going into or out of the restaurant without receiving a friendly greeting from the older man. “Hi, how are you all tonight?” he would tell those entering, and not a customer left without hearing, “Bye, I hope you have a good night,” as the veteran treated everyone as his friend. Sadly, he didn’t always seem to get the same kind attention in return.

“Most people reacted to him, others completely ignored him,” Sparks recalled. “That didn’t stop him from greeting every person who walked by.”

After hearing this veteran’s kind greetings, Sparks and her mother were placed at a table across from where he was seated. Throughout their dinner, Sparks’ attention remained on the vet, and she watched him eat his meal with a huge smile on his face. Then, the waiter walked up to the man’s table. In a restaurant full of people, the patient waiter took particular care of this veteran.

The employee gave the veteran all the time in the world, listening to his stories, laughing with him, and providing a little company for this guy, who shouldn’t have had to eat alone. It was beyond what’s expected of him as a waiter, but it was clear that he had a deep respect and general compassion for this man.

After being moved by the incredible customer service and wanting to pay it forward, Sparks and her mother called the manager over and asked if they could cover the veteran’s tab. With a smile, the manager was proud to tell her, “Ma’am, someone else already has.” Evidently, everyone seated in the veteran’s section at Texas Roadhouse felt the same way as Sparks, and everyone wanted to pay for this man’s dinner.

“Everyone in the section grinned when the waiter told him that his meal was covered,” C Sparks recalled. “The man then left, telling everyone on the way out that he hoped they had a good night.”

It’s moving to see that regardless of how many people ignored this man, there were more amazing Americans who recognize him for the hero that he is. We need to watch out for our veterans and be kind to them. Many are shouldering a lot of pain from war and what they have seen and experienced, all to defend our freedom and pay that tab for us.