Prince Louis, four, made a touching tribute to the Queen before her demise but was not allowed to attend her funeral.

Kate Middleton shares the reaction of her son, Prince George, after the death of their Great Grandmother.

Before her demise, Queen Elizabeth made long-lasting memories with her great-grandchildren

On September 19, 2022, Royal Family members gathered at Westminster Abbey to say their final goodbyes to Queen Elizabeth at her state funeral.

The British longest reigning monarch died peacefully at Balmoral Castle on September 8, 2022, surrounded by her loved ones. People attending the somber ceremony included most of the royal family, including the Queen’s four children. 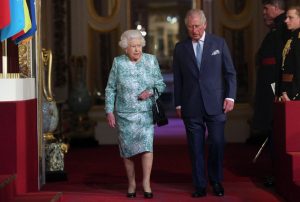 Queen Elizabeth II and King Charles III arrive for the formal opening of the Commonwealth Heads of Government Meeting (CHOGM) in the ballroom at Buckingham Palace in London on April 19, 2018. | Source: Getty Images

Arrangements for the state funeral were approved by the late monarch long before her demise. The ceremony began with a procession from the Palace of Westminster, where Queen Elizabeth had been lying in state for a few days, to Westminster Abbey.

During the procession, an emotional King Charles III was captured walking behind his mother’s coffin, decorated with the Royal flag, her crown, and orb and scepter.

Indeed, it was a memorable and emotional moment for not only the reigning monarch but also the 2000 guests, millions of viewers, and other members of the Royal Family, including Prince Harry and Meghan Markle. 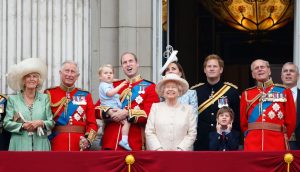 Afterward, the couple exited the venue behind the Prince and Princess of Wales. The latter duo was not exempted from all the attention, as they also had sad faces.

Prince Harry, Duke of Sussex, and Meghan, the Duchess of Sussex, follow the coffin of Queen Elizabeth II as it is carried out of Westminster Abbey after the State Funeral on September 19, 2022, in London, England. | Source: Getty Images

Undoubtedly, it was difficult for the grown-ups to say goodbye to the Queen, but it was even more tasking for the younger Royal Family members like Prince George and Princess Charlotte.

According to a report from Daily Mail, despite how tender the duo was, they understood how vital and sorrowful the occasion was.

So, to help them cope, Middleton reportedly offered George and Charles “constant reassurance.” For the siblings, saying farewell to their great-grandmother had been one of the most tasking things to do in their royal lives. 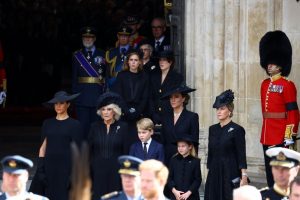 One could tell based on their reactions to the news of the Queen’s death and their countenance during the funeral.

Kate Middleton’s Children’s Reaction to the Queen’s Death
Many would expect that the late Queen’s great-grandchildren would not understand the gravity of Her Majesty’s demise due to their young age. However, shortly before Queen Elizabeth’s state funeral, Middleton revealed otherwise.

During the event, the young prince was caught on camera looking up at the Queen and desiring her attention. 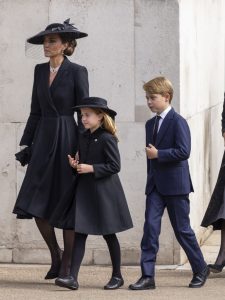 Princess Catherine of Wales, Princess Charlotte of Wales, and Prince George of Wales were seen at Wellington Arch, where the coffin of Queen Elizabeth II was transferred to the hearse for the final trip to Windsor after the State Funeral on September 19, 2022, in London, England. | Source: Getty Images

During a chat with Australia’s Governor General, David Hurley, the Princess of Wales opened up about how her kids were handling the tragic demise of their great grandma.

Hurley recalled the conversation a few days later. According to him, Middleton revealed that her oldest son, George, was “sort of now realizing how important his great grandmother was and what is going on.” 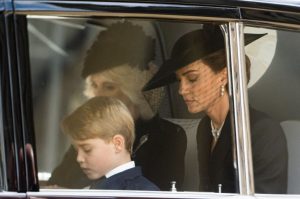 He confessed that the Princess of Wales said her youngest, Prince Louis, was eager to know if his visits to Balmoral would be the same. According to Hurley, the young prince also asked questions like:

“Do you think we can still play these games when we go to Balmoral and things like that cause she’s not going to be there?” Prince George, Princess Charlotte, and Prince Louis, accompanied by their parents Prince William and Catherine, Duchess of Cambridge, arrive for a settling in afternoon at Lambrook School, near Ascot, on September 7, 2022, in Bracknell, England. | Source: Getty Images

However, the young prince still offers comforting words to his mom despite his curiosity. On September 12, 2022, Middleton was captured talking to public members mourning the Queen. During the event, the mom of three spoke to other children about Louis’s sweet and encouraging words. She said:

“My little Louis, he is just so sweet. He said, ‘Mummy, don’t worry, she’s now with great grandpa.'” 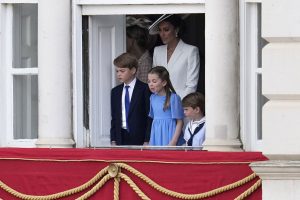 Princess Catherine of Wales stands with her children Prince George of Wales, Princess Charlotte of Wales and Prince Louis of Wales watch overlooking Horse Guards as the troops march past during the Queen’s Birthday Parade, the Trooping the Colour, as part of Queen Elizabeth II’s platinum jubilee celebrations, in London on June 2, 2022. | Source: Getty Images

Sadly, although Louis comforted his mother with his words, the young prince could not bid a final farewell to Queen Elizabeth. Louis was not at Her Majesty’s state funeral, unlike his older brother and sister. According to reports, he was considered too young to attend the event.

Louis, as well as George and Charlotte, will not be in the final procession for the late monarch, even though they will travel to Windsor for the committal service in St George’s Chapel.

Meanwhile, Louis joins the list of great-grandchildren absent from Queen Elizabeth’s state funeral. He joins his cousins, Archie and Lilibet Mountbatten-Windsor, who are younger than him. 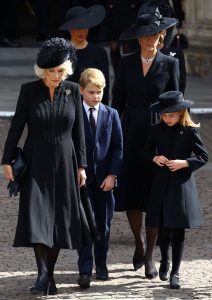 In the meantime, it remains unknown if other great-grandchildren like Savannah Phillips, Isla Phillips, Mia Tindall, Lena Tindall, Lucas Tindall, August Brooksbank, and Sienna Mapelli Mozzi were in attendance.

Queen Elizabeth’s Relationship With Her Great Grandchildren
Considering her position before her demise, Queen Elizabeth may have been one of the busiest Royal Family members. However, despite her busy schedule, spending time with her family was one of her topmost priorities. As a result of her availability, Her Majesty’s great-grandchildren were able to make lasting memories with the Queen before her death. 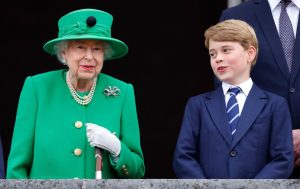 One of those precious moments was during Queen Elizabeth’s Platinum Jubilee Celebrations. Louis had appeared at the Buckingham Palace Balcony with his great grandmother to kick-start the four-day event.

During the event, the young prince was caught on camera looking up at the Queen and desiring her attention. Later, he moved away from his mom to get closer to Her Majesty. It was a sweet moment that caught the attention of many.

About four years before the sweet moment, cameras captured another beautiful sight between Queen Elizabeth and Princess Charlotte. During Trooping the Colour in 2018, the little princess was spotted copying her great-grandmother’s royal wave. 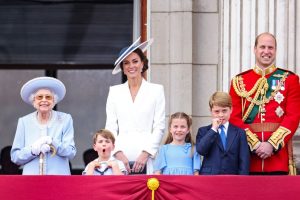 Charlotte had watched Her Majesty wave at the crowd and followed suit. Her actions seemed to surprise Middleton, who quickly alerted her husband.

The following year, during Christmas, Queen Elizabeth and Prince George melted hearts after a video showed them alongside King Charles and Prince William, mixing pudding to support a Royal British Legion Project. 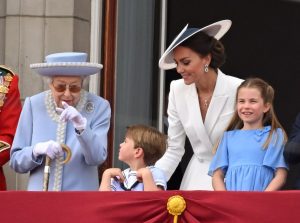 Although George was in control of the wooden spoon and bowl, seeing the four generations, especially the young prince and his great-grandmother, was beautiful.

Sadly, the Queen’s great-grandchildren will not be able to make any more memories with Her Majesty, but the latter will always be remembered for the time she spent with the young royals.