Princes William and Harry led a somber vigil by the Queen’s coffin.

Harry tried to avoid the humiliation before the vigil.
Harry and Meghan’s state reception “uninvite” is “beyond bonkers,” their friend reportedly said.
William and Harry were “not prepared” for the Queen’s death.
After Queen Elizabeth II passed away on September 8, 2022, the royal family began royal procedures that are customary after one of their own passes away. The most recent has been the Queen’s funeral.

Most recently, Princes William and Harry, along with their cousins, led a vigil beside their beloved grandmother’s coffin after mourners had been visiting the site for days. 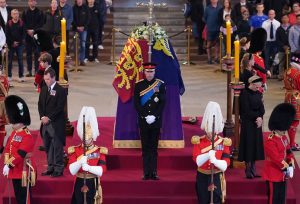 “CNN” confirmed that the vigil was held on Saturday, September 17, 2022. The Queen’s coffin was situated in Westminster Hall at the time of the vigil, and her grandsons led their cousins in the event.

While the Queen’s coffin had been on display since Wednesday, September 14, 2022, Princes William and Harry only held a vigil for 15 minutes on September 17. 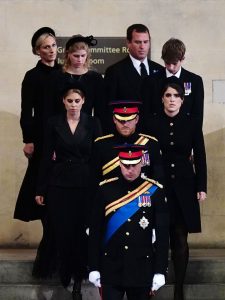 “CNN” reported that because Prince Harry is no longer a working member of the royal family, he has been seen in morning suits at public engagements. However, for this occasion, he and his brother wore military suits.

The princes’ vigil came one day after King Charles III and his siblings participated in a similar engagement with the Queen’s coffin. The Queen’s state funeral is set to be held on Monday, September 19. 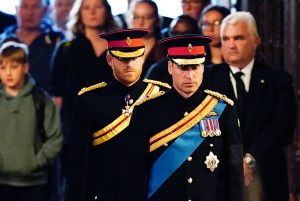 It has been alleged that Prince Harry and Prince William have set aside their differences and united in grief for their grandmother. However, the vigil was not without drama as Prince Harry was stripped of yet another title.

Why Was Harry Left ‘Devastated’?
“The Times” UK’s Roya Nikkah reported that since Prince Harry and Meghan Markle stepped down as senior royals in 2020, Prince Harry was stripped of the military titles he had earned over the years. Yet he wore his military uniform for the vigil at King Charles III’s request, says “Mirror.”

When Prince Harry received his uniform on the morning of the vigil, though, something was missing, claims Nikkah. Prince Harry’s grandmother’s initials, “ER,” had been removed from the shoulder of the uniform.

Nikkah reported that even though King Charles III had asked him to wear his military uniform, on seeing the “ER” removed, Prince Harry was considering civilian clothing to avoid humiliation.

Nikkah claimed that a friend had confirmed Prince Harry’s feelings on the situation, saying:

“He is heartbroken. To remove his grandmother’s initials feels very intentional.”

The “ER” initial was an essential part of the uniform as it represented Queen Elizabeth II, confirms “Metro UK.” The “E” represents the Queen’s first name, Elizabeth, while the “R” stands for “Regina.” 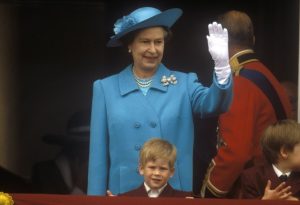 The publication said that “Regina” means “Queen” in Latin. The Royal Cypher for Queen Elizabeth II was either “EIIR” or “ER.” The “EIIR” includes the roman numerals because she was the second Queen Elizabeth.

Royal Cyphers are unique to each reigning monarch as it comprises their name and title. The Royal Cypher is sometimes interwoven and topped with a crown to represent the royal status of the person, reported “Metro UK.”

According to Prince Harry’s statement, which he posted on his Archewell website, he and the Queen had a close relationship. The prince mentioned in his statement that he would cherish the memories he had with his grandmother. 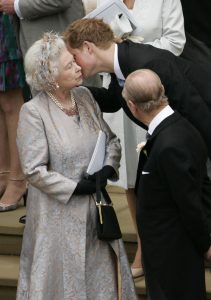 Prince Harry kisses his grandmother Queen Elizabeth II after the wedding of Peter Phillips to Autumn Kelly, at St George’s Chapel in Windsor Castle on May 17, 2008 in Windsor, England | Source: Getty Images

He ended the statement by thanking Queen Elizabeth II for her service and the advice she had imparted to him over the years. He then said he smiled, knowing she and Prince Philip were together again. For this reason, it was devastating for the prince not to be able to wear the initials.

“Daily Mail” confirmed that after the vigil, Prince Harry and Meghan Markle have been excluded from royal proceedings in honor of the Queen, which they are deeply upset by. The couple was uninvited to a state event that would see 1000 world leaders honor the Queen’s legacy.

Although “Daily Mail” reported that the couple was invited to the event, it was said that officials at Buckingham Palace informed them that the event was meant to be for working members of the royal family only. Therefore, Prince Harry and Meghan Markle opted out of attending but felt “excluded.” 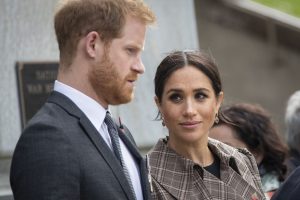 While the couple decided not to attend because of what was said to them by palace officials, “Mirror” reported that a friend of the couple said:

“It is beyond bonkers if they’re not there. Everyone is coming in from around the world to pay their respects to the Queen.”

Have The Brothers Buried The Hatchet?
“The Times” reported that Prince William and Prince Harry had formed some kind of truce after their grandmother died. It began when Prince William invited Prince Harry and Meghan Markle to a walkabout to see the tributes fans had paid to Queen Elizabeth II. Prince William apparently thought that it was important that the two couples displayed unity to the onlookers. Princess Kate also said:

The couples walked together at Windsor and looked at all the flowers and tributes left for the Queen. Many fans enjoyed seeing the brothers together again, but the sisters-in-law were not as friendly to each other. 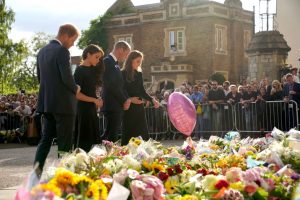 “It brought back a few memories. It’s one of those moments when you think: I’ve prepared myself for this, but I’m not prepared.”

Just days after his grandmother passed away, Prince Harry celebrated his birthday on September 15. The prince chose to spend his birthday privately with his wife, “Mirror” reports. As he did this, Prince William spoke about his brother’s birthday. 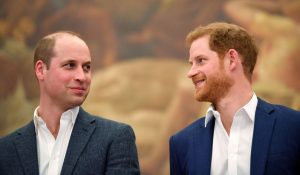